in the Syrian Orthodox Church.

It is a well-known fact that, in the Qurobo,  the transformation of the  bread into the body of the Lord and the wine into the blood of Jesus Christ is fundamental in our Christian faith. I have noticed that some of the children of our church did not know about the significance of this miracle ,so I wanted to explain this great mystery in figures, to teach the children of our Church about this very important rite. Some of the information are taken from the book of the Interpretation of the Divine Liturgy of the (Thrice blessed?) Mor Severius Izhak SaKa, God rest his soul.

This dough is shaped in the form of a round circle, and in the middle a round seal is divided into twelve parts, one part called the    ܡܰܪܓܳܢܺܝܬܳܐ jewel or    ܓܡܽܘܪܬܳܐCinder, which is pierced by five holes, at the time of baking, referring to the five wounds :(the spear ,the crown of thorns and the three nails in his hands and feet. This disk is called in Syriac    ܦܪܺܝܣܬܳܐ or   ܦܽܘܪܫܳܢܳܐ   which means the bread offering, called (burshaneh) by the public  because it is dedicated to the Divine Sacrifice( just as God Almighty, the Word, appeared  in Divinity, Soul and Body as One Person(? Oguenoma),  one nature incarnate without mixing or mingling or confusion( you choose Abouna) and was exclusively offered as a sacrifice on the cross for our salvation. It is also called   ܛܰܒܥܳܐ , seal or stamp and ,ܒܽܘܟܪܳܐ  the First Born. 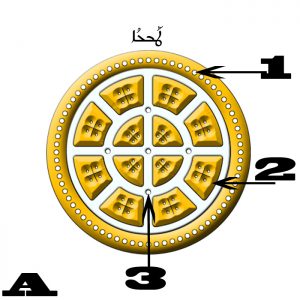 The numbers referred here in figure A are:
1 – The holes on the disk, 72,represents the 72 missionaries sent by Lord Jesus, glory to His name,  to preach the Gospel of  life.

2 – The Jewel or Cinder , 12, the number of the disciples of Lord Jesus.
3 – The holes that fill the cross inside the disk, 5 of them, symbolize the five injuries mentioned above.

In our Syrian Orthodox Rite, there is a step called the Breaking, when the curtain is closed, and the deacons and deaconesses sing suitable hymns for the occasion. The priest breaks the ( burshaneh), which symbolizes  the crucifixion of Lord Jesus, and His death on the cross. Closing the curtain symbolizes the veil put on the eyes of the angels, so they don’t see the Lord in His suffering and dying state; because they cannot bear viewing their Lord’s suffering. 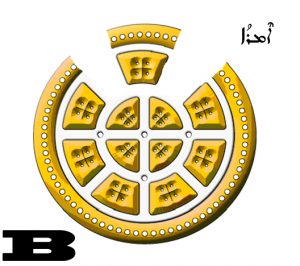 The  Burshaneh ( Qurobo), in the Syrian Orthodox Church Rite, after the breaking, is called the Lamb, and it resembles the lamb, in Suryouo (Emro).

In figure B, the shape represents the Lamb in the Breaking, and it is performed from the time of the Birth of the Lord till Good Friday 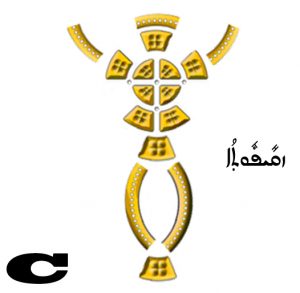 The Burshaneh (Qurobo), in The Syrian Orthodox Rite, after the breaking, is called the Cross; it resembles the shape of the cross. In Suryoyo, it is calleed ( Zqeefootho), the Crucifix.

The figure C represents the Cross in the breaking, it is performed from the Saturday of Lights till The Elevation of the Cross celebration 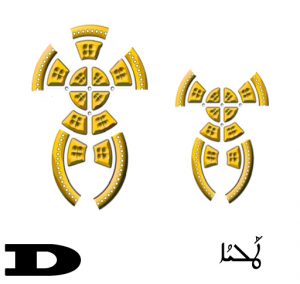 The Burshaneh (Qurobo), in the Syrian Orthodox Church Rite, after the Breaking is called the Boy, and it resembles the shape of a boy. In Suryoyo it is called (Talyo).

The figure D represents the Boy in the Breaking, it is performed from the Elevation of the Cross on the 14th of  September till Christmas 25th of December.