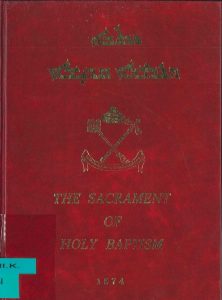 The Order of Baptism

The Syrian Church has a service book containing prayers for the order of the Sacrament of Baptism. This order has two forms, one for the baptism of boys and the other for girls. Some prayers of this order are ascribed to the Saints Clement and Dionysius the Areopagite and others to St. Severus of Antioch. Our long service book mentions that these prayers were based on the order of baptism by Severus of Antioch, translated from the Greek by Jacob of Edessa. This has also been confirmed by John of Dara, Moses Bar Kepha, Bar Salibi and Bar Hebraeus. An old manuscript in the British Museum shows that Paul, metropolitan of Telia, translated the order of baptism of Severus (from Greek).[1] It contains two services, one for the neophyte and the other for the baptized.

We have another short order recited during the child’s sickness and an even shorter one, probably not more than two pages, written by either Philoxenus of Mabug or Severus of Antioch, for baptizing the very seriously ill child. In MS. 17128 of the British Museum we found an order of baptism by Timothy of Alexandria (457-477). The Jerusalem MS. 127 contains a short order of about ten pages, written by Patriarch John Bar Shushan and used in the event of imminent death. A manuscript in the Za’faran Monastery contains an exposition by Severus of Antioch on the order of baptism in three pages. The Church of Mosul has a special short order, different from the Western order and undoubtedly was written by the Eastern fathers. I have also seen, in the village of Bartelli, an order abridged by a Maphryono, most likely Bar Hebraeus.