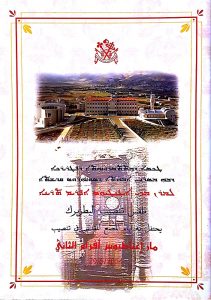 AKHRASS, Roger – KIRAZ, George (ed.), The Order of the Installation of the Patriarch (Damascus 2014)

Ordinations are preceded by instructions for the elect priests and deacons, according to which the ordained confesses that he will follow the teachings of the fathers and doctors of the catholic church and obey the Patriarch of Antioch and the metropolitan of his diocese and will renounce the heretics and dissenters, enumerating them one by one from the Apostolic era to the ninth century. This statement of creed has two versions: a long one comprising ten pages, of which two copies, written in the beginning of the thirteenth century, are preserved in our library and in the Vatican MS. 51; and a shorter, more commonly used one, written by Jacob, metropolitan of Miyapharqin, in the middle of the tenth century.

The new bishop also reads a statement of creed drawn by Patriarch Quryaqos in which he confesses the church’s creed of faith, pledges allegiance to the doctors of the church and excommunicates the heretics and declares his obedience to the Patriarch of Antioch. The copy of this order was completed in 806.[4] At the same time, the Patriarch provides the new bishop with a statement called the sostathiqon, or the diploma of investiture, in which he invests him with episcopal powers to administer his diocese and orders his congregation to obey him. In Meddo, in Tur ‘Abdin, we found the oldest copy of this order, written in the thirteenth century and containing the investiture of Basilius, metropolitan of Khabur, by Ignatius III, Patriarch of Antioch in 1231 and signed by John II Bar Ma’dani, Maphryono of the East and by four bishops.[5] Our copy is a reproduction of this one. Later, however, this diploma of investiture was translated into Arabic; we possess two copies of the translation, completed in 1768 and 1806.

To the order of the consecration of the Patriarch, Jacob Bar Salibi, metropolitan of Amid, added a homily, which he delivered during the ceremony of enthroning Michael the Great (at the close of 1166); another homily on the assumption of the monastic habit by monks and initiates written by Moses Bar Kepha, was finished by Bar Salibi. The order of the consecration of the holy Chrism is followed by two anonymous homilies, one of which was recited after the ceremony. This ceremony is also followed by a heptasyllabic discourse chanted by the archdeacons in praise of the officiating dignitary and another dodecasyllabic discourse in which the bishop blesses the congregation. A copy of this metrical discourse is extant in MS. 109 in our library at Jerusalem.

The oldest manuscript of the office of ordination is the copy of Patriarch Michael the Great, dated 1190.[6] This illustrious church dignitary was the last to revise and arrange the orders of the offices of ordination, which had been in a state of confusion. His copy is most reliable. Two other copies are extant in our church in the town of Ma’murat al-‘Aziz; one of them was completed in either 1190 or 1200 and the second was transcribed and commented upon by the Bishop John David of Amid in 1203. Two other magnificent copies were transcribed by the deacon ‘Abd Allah of Bartelli in 1300,[7] at the request of Gabriel, bishop of the Jazira. Two more ancient copies are extant in our Library, together with an elegant copy transcribed by Joseph, metropolitan of Jerusalem, reproduced from the copy of the monk Abu al-Faraj of Amid, the secretary of Patriarch Michael.[8] Another copy, in the handwriting of Patriarch Nuh, dated 1506, is available in the Library at Jerusalem.[9]

[3] Also called “ Suntroniso,” a copy of which is preserved at our church in Hafar, a village near Homs.

[7] Jerusalem Library MS. 109; also in the library of the Edessans in Aleppo.