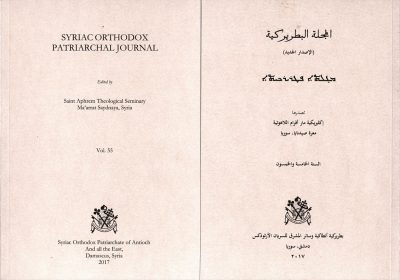 The Patriarchate of Antioch and All the East for the Syriac Orthodox Church issued journals that acted as her mouthpiece, and each one was considered as an official Patriarchal Journal. This took place in phases:

First: It was issued under the name of Al-Ḥikma, August 1913, at the time of Patriarch Abdallah II of blessed memory. The director was Mr. Hanna El Qass, and the editor-in-chief was Michael Hikmat Jiqqy. It was printed at the Syriac printer in Deir Al-Zafaran, Mardin, Turkey; the Patriarchate Headquarters at that time. It lasted one year only, and then it disappeared in 1914, because of the World War I.

Second: After 14 years, it started again in October 1927, at the time of Patriarch Elias III of blessed memory, and was printed at St. Mark’s Monastery, Jerusalem. The journal stopped by the end of December1931.

Third: When the late Patriarch Aphrem I Barsoum became a Patriarch, he issued the journal under the name of The Patriarchal Magazine, in April 1933, the same year he ascended to St. Peter’s See. It was printed at St. Mark’s Monastery, Jerusalem. The Patriarch himself nurtured the magazine with his valuable editorials and researches in history and religion.

In 1941, the Journal stopped for financial reasons. In its absence, Aleppo issued the Syriac Newsletter, which was written by the SyriacYouth of the city. Later, it stopped too, unlike many newspapers such as, Lisan al-Umma – Beirut, Beth Nahrin and others. Then, Raban Boulos Behnam, the principal of St. Aphrem Clerical Seminary in Mosul, Iraq, established the journal Al-Mashriq (1946-1947). Afterwards, he restarted it under the name of Lisan el Mashriq, which continued till 1952.

Fourth: In 1957, when the late Patriarch Yacoub III became Patriarch, he decided to continue publishing the Magazine. He published it in Damascus in 1962, and appointed Mr. Said Abdennour as its director and editor-in-chief. It continued till he passed away in 1980.

Fifth: When the late Patriarch Mor Ignatius Zakka I Iwas became a Patriarch, on September the 14th, 1980, he also decided to continue the publication of the Magazine, like his predecessor, especially because journalism was his hobby, and he studied it in his early youth. He published many articles on different subjects; religious, literary and social, sometimes under his name and sometimes under a pen name, in daily, weekly, monthly and quarterly newspapers. Patriarch Zakka infused the journal with a new progressive spirit, modern in its subjects and different dissertations, making it a monthly, Syriac, religious, historical, literary and popular journal at the same time. His Holiness took it on his own to sponsor and completely supervise its production from A to Z. He even used to review personally, all the articles received, to make sure they fit the criteria of the Patriarchate’s principles. He made sure it carried the Parishes’ news from all over, and he corrected them, edited them and sent them to the printer. Even small excerpts or briefs were written or molded to his own style.

Sixth:  When His Holiness, Mor Ignatius Aphrem II ascended on St. Peter’s See, he continued the publication of the Patriarchal Magazine, but now it progressed, and was divided into two series: 1- News and documentation, that is issued twice a year under the name of the Patriarchal Magazine (al-Mağallah al-Batriarkiyyah); 2- Academic Annual peer-reviewed Journal, called The Syriac Orthodox Patriarchal Journal  ( ISSN 2414-6986) (al-Mağallah al-Batriarkiyyah – al-Iṣdār al-ğadīd), issued by St. Aphrem Theological Seminary, linked to the Syriac Orthodox Patriarchate of Antioch. This Annual Journal specialized in publishing in Syriac, Arabic and European languages, articles related to the following areas within the field of Eastern and Syriac Christianity, including but not limited to:

How to submit a paper?

To submit a paper, you can e-mail us on the following address: sopj@syriacpatriarchate.org

Where to purchase SOPJ?
The Journal costs €47 / $US50 and can be purchased locally at:

How to purchase SOPJ online?

International orders directly from Saint Aphrem Theological Seminary will have the following shipping charges: + €16 / $US17, Europe // + €23 / $US25, America, Africa and the Far East.

You may order your copy by:

1- Paying online (the volume cost + shipping charges) at http://syrianorthodoxchurch.org/donate-2/, specifying to what end you are making the transfer

1- Making a bank Transfer to :