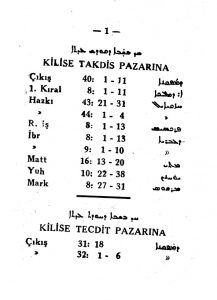 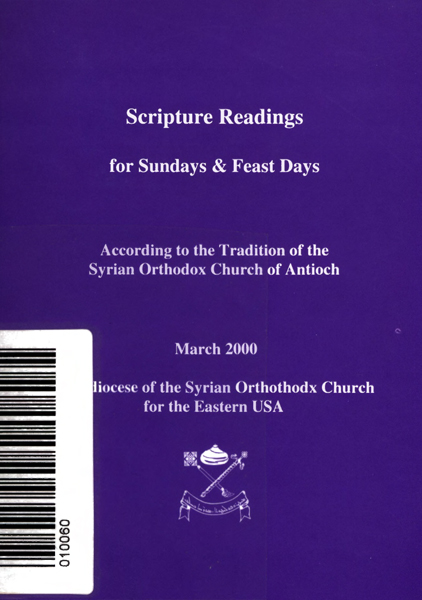 Syrian scholars divided the Scriptures into chapters, from which they selected reading lessons for the whole year, as follows:

They also prescribed four or five lessons from the Old Testament for the consecration of the Chrism, specific Sundays of the Lent and Good Friday. In the administration of the two sacraments of Baptism and the Divine Eucharist, only one lesson from the Pauline Epistles and another from the Gospels are to be recited. Another three lessons from the Gospels were assigned for morning and evening recitation, as well as during the celebration of the Divine Eucharist. For both Christmas and Easter, a fourth lesson was added for the evening service. Other lessons were also recited twice every day of Lent except Saturdays and at every prayer hour during the Passion Week. Three lessons were assigned to the feast of Pentecost.

The assignment of these chapters by the scholars of the church was made in accordance with the themes of Sundays, festivals and ordinary days of worship. Their division is marked with taste, precision and great wisdom not found in the rest of the Eastern or Western Christian rites. These scholars, however, excluded from the Scriptures the reading of the Song of Songs, the Book of Revelation, and the greater parts of the two Books of the Maccabees.

The arrangement of Gospel lessons to be recited in Passion Week was made in the middle of the ninth century by Daniel, the monk of the Monastery of Beth Bātīn and disciple of Benjamin, metropolitan of Edessa, assisted by his enterprising pupil Isaac the monk. Daniel selected some of these lessons from the Diatessaron and collected those readings scattered in the four Gospels. From that time on, transcribers of the Gospels have mentioned the work of Daniel and Isaac in all the copies which have reached us. In the Bibliothèque Nationale MS. 258, we read that, in 1000, the Patriarch Athanasius IV of Antioch, known as Salhoyo (of Salah) (d. 1002), collected and classified lectionaries from the Old and New Testaments.

These lessons were recited in Syriac. Three old copies of the collections of lectionaries are preserved in the British Museum (MS. 220 dated 824; MS. 243 dated 862; and MS. 224 dated 1000). Another fourteenth century copy, in a good script, is preserved at our library in Homs. Copies of the Gospels are plentiful and available in most libraries.

The oldest Syriac copy of the New Testament, which was translated into Arabic, dates back to the year 1189 and is preserved in the Monastery of St. Matthew. Much later the books of the Old Testament were written in Arabic and thus the readings of the Bible were confined to this language, except in Tur ‘Abdin.[1] However, we are unable to investigate the subject of the Arabic translation of both Testaments, due to the unavailability of clear old texts and authentic historical information. What we know is that John III, Patriarch of Antioch, concerned himself with the translation of the Gospels into Arabic by scholars well versed in both languages from the tribes of Tay, Tanukh and ‘Uqayl, about the year 643, at the request of ‘Umayr Ibn Sa’d, Prince of the Jazira, as we are told by the anonymous Edessene historian[2] and Bar Hebraeus.[3] Another translation into Arabic from the Syro-Hexapla was made by the famous Nestorian physician Hunayn Ibn Ishaq (d. 873).[4] We have also found in Kitāb al-Dīn wal-Dawla (The Book of Religion and State), by ‘Ali Ibn Rabban al-Tabari[5] (d. c. 860), published by Mingana in Egypt in 1923, portions of the Old Testament, and chapters from the Books of the Prophets, as well as fragments from the New Testament, written in the most eloquent and magnificent style. We do not know much about this translation.

A translation of the Pentateuch from the Syriac Syro-Hexapla into Arabic was made by Harith Ibn Sinan, who may be Harith Ibn Sinan Sinbat of Harran the Malkite at the close of the ninth and the beginning of the tenth century.[6] A translation of the Old Testament was also made by Shaykh Sa’īd Ibn Jacob al-Fayyumi, better known as Sa’diya the jew, about the year 900. MS. 21 of the Florentine library contains an Arabic translation of the Pentateuch from the Hebrew, made in 1245. Another copy of the Old Testament containing half of the books of the Pentateuch, copied from the translated version of Shaykh Sa’id al-Fayyumi, is preserved in the library of the Coptic Patriarchate in Egypt (MS. 23) and dated 1585. Our librarv has a mutilated copy of the Acts and the Epistles translated by Severus Ibn al-Muqaffa’, bishop of the Ashmunin, in the tenth century from Greek, Syriac and Coptic copies, which were commented on in 1240. Vatican Library MS. 145 contains an Arabic translation of the Psalms, the Gospels, the Prophets and the Epistles from the Greek according to the usage of the church, by the deacon ‘Abd Allah Ibn al-Fadl al-Antaki al-Rumi (d. 1052).

In 1250, Shaykh As’ad Abu al-Faraj Ibn al-‘Assal the Copt coordinated a translation of the Gospels. Our library in Jerusalem contains two excellent copies of the Gospels, one in Syriac and the other in Arabic. The Syriac copy is written in the Nestorian script and undated, while the second copy, more rhetorical than the first, (MS. 261) was completed in 1229. MS. 42 of the Bibliothèque Nationale contains a copy of the Gospels translated from the original Greek, transcribed in 1226. Another copy in Birmingham (MS. 431) was copied in 1368.[7] The library of the Monastery of St. Matthew has the book of Psalms in Syriac and Garshuni, in a very eloquent language, copied in 1445. We believe that the Book of Psalms exists in many Arabic translations, as well as Syriac translations from the Greek.

Despite the difficulty of investigating these scattered translations and texts, we have found that the Arabic versions of the Holy Scriptures greatly differ in quality and fall into three categories: the eloquent, the mediocre and the poor composition.

Things in the East remained as they were, as we have formerly mentioned, until the new, familiar Arabic translation appeared in the nineteenth century, superseding the Latin and Arabic translations which were published in Rome in 1671. Of these translations, the nearest one to the Syriac Pshitto is the one edited by the Catholic Bishop Yusuf Dawud, who has copied verbatim parts of it, especially the New Testament, from old manuscripts found in the churches and monasteries in Iraq. It was published in Mosul between 1871 and 1878. The most lucid of these copies is the Jesuit translation published in Beirut between 1872 and 1878.

[5] He was a Christian who embraced Islam and wrote his book.

[7] We have overlooked the translation 1, p. 275 of the four Gospels by the bishop ‘Abd Yeshu’ of Soba in 1300, written in a forced, rhymed prose which rendered it poor and incoherent. Copies of it are found in Mosul and other places. In his introduction, the translator mentioned another previous translation by Abu al-Faraj ibn al-Tayyib, Yeshu’yahb ibn Malkun in 1256 (MSS. 1 and 2 in the al-Sharfeh Monastery in Lebanon) and al-Shaykh Ibn Dadyeshu’.