Burial of the dead 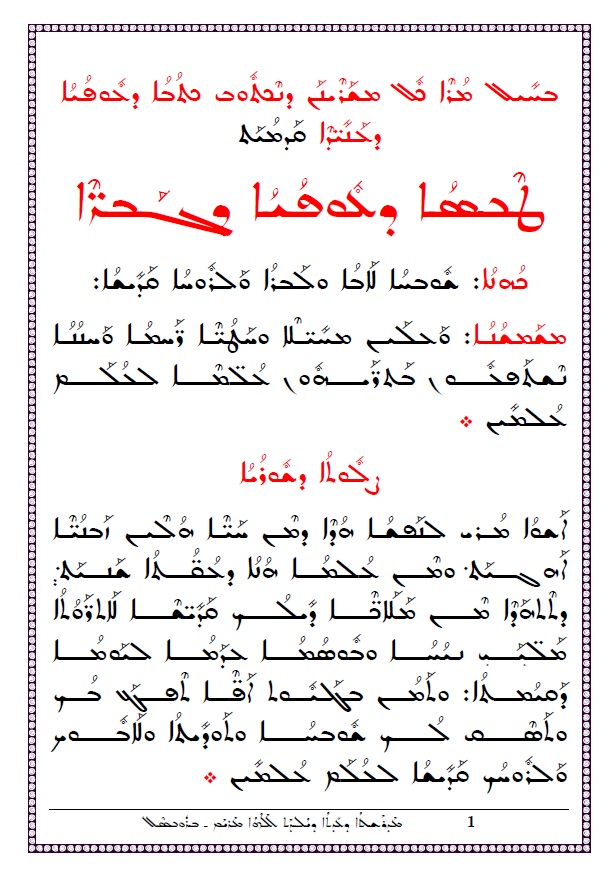 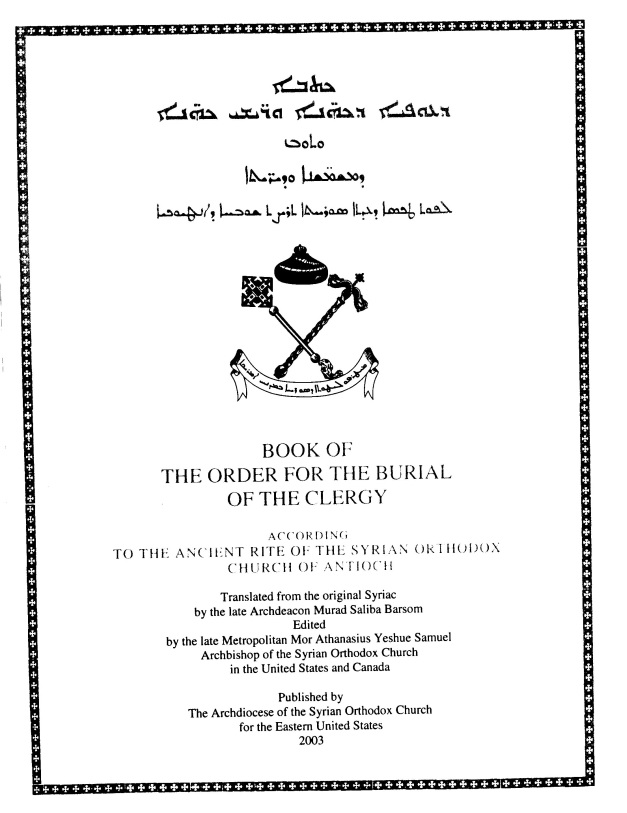 BOOK OF THE ORDER FOR THE BURIAL OF THE CLERGY 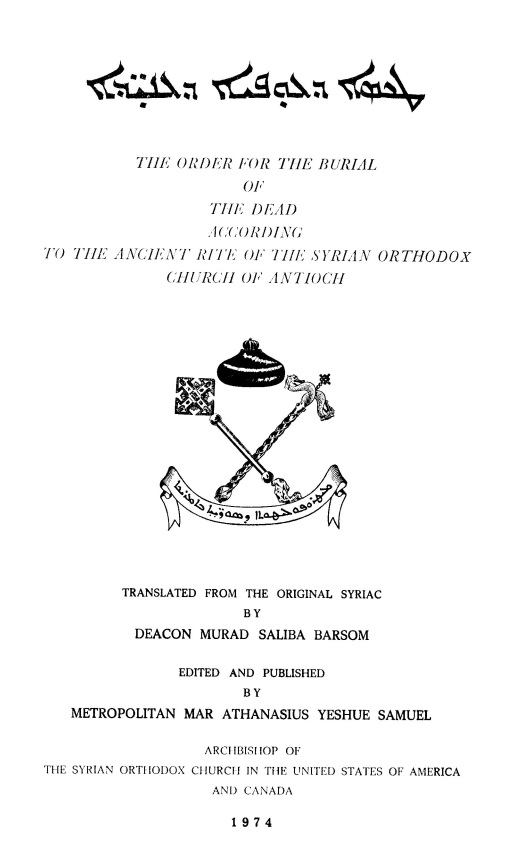 THE ORDER FOR THE BURIAL OF THE DEAD

The Funeral Service Book, or the Phanqitho order of burials,[1] or the handbook of burials,[2] is of two parts. The first contains the funeral service for deacons, priests, bishops, Maphrvonos and Patriarchs. It is comprised of eight services, all of which are recited in the funeral of Patriarchs, seven for the Maphrvonos, six for the bishops, five for the priests and four for the deacons. This first part was compiled and arranged by Jacob of Edessa. But an eloquent and passionate metrical hymn composed by John Bar Andrew (d. 1156), metropolitan of Mabug and then of Tur ‘Abdin was added to it in the middle of the twelfth century. The oldest copy of this part is contained in a magnificent vellum manuscript completed in the twelfth century too.[3] Another copy is in London.[4] Attached with it is the Order of the Funeral Service of monks, three copies of which are in Boston, St. Matthew’s Monastery and Qaraqosh, respectively.

The second part contains the funeral service for laymen, namely children, young men and women and grown up men and women. Originally it contained one service only, but today it is made up of three services, each one of them special to these groups of laymen. In fact, the above-mentioned Boston MS. contains four times of prayers for each one of these services. In an old fourteenth century manuscript in the handwriting of Simon[5] it is mentioned that this second part was compiled and revised also by Jacob of Edessa.

The funeral service consists of the chanting of psalms, appropriate lessons from the Holy Bible, the chanting of qolos and madroshos (metrical hymn) as well as ghnizos (prosaic mystic hymns), takhsheftos and husoyos (supplicatory songs and prayers) and a bo’utho (litany). The funeral service for priests is usually concluded by a four-syllabic hymn of excellent poetry, perhaps composed by Asuna, the disciple of St. Ephraim, which begins with: “Thou has created me whilst I was non-existent and as thou hast created me have mercy on me.” The funeral service for laymen is likewise concluded by a passionate metrical hymn by the same poet which begins thus: “Our Lord shall come and raise the dead. I have been separated from you my beloved ones, therefore, pray for me in order to go and receive the Lord’s favor.” There is a third metrical hymn by Asuna mentioned by Anton of Takrit which begins thus: “My days have come to an end.” These hymns which were called “the ancient hymns” ceased to be used except by the churches of Iraq.[6]

An old funeral service book written in elegant fine Estrangelo script in 823 and presented in MS. 92 in the Vatican contains the following: Thirty-one songs by St. Ephraim, two of which begin thus: “I have rejoiced when they told me” and “Farewell, O earthly abode” (both of which are used in the Eastern Rite) and another hymn whose origin is unknown to us: “My days have passed;” metrical songs for different clerical ranks, one of which is for bishops and begins with “Who does not rejoice,” and several metrical hymns by St. Ephraim and St. Isaac together with hymns and canticles for the funeral services for bishops, monks, deacons and stylite ascetics. It also contains three consolatory discourses for priests and deacons, two of which are in prosaic form and the third in metrical (composed by Asuna and beginning: “Brethren, implore the King for me and pray with tears for I am separated from you forever”).

The ancient funeral service books contained metrical hymns for the dead selected from the odes of Sts. Ephraim and Isaac and Jacob of Sarug. Several manuscripts dealing with this subject shall be discussed later. We have also found in Meddo in Tur ‘Abdin an old manuscript written in the thirteenth century which mentions the different customs in conducting the funeral services in Tur ‘Abdin, Mardin, Melitene, ‘Anī,[7] Syria, Palestine and other places. Another manuscript with elegant script completed at the beginning of the fifteenth century and preserved in our church in Hamah contains a funeral service according to the orders of Melitene, Hisn Ziyad and the northern countries. It also contains another funeral service for the priest according to the order of Tur ‘Abdin, from which has been copied the new MS. 118 of the Jerusalem library.

[1] See Anton of Takrit, On the Knowledge of Rhetorics, part 2, treatise 5.

[6] Anton of Takrit. On the Knowledge of Rhetorics, part 2, treatise 5.