Calendar of Festivals For The Whole Year

A part of the Syriac rituals is the Calendar of Festivals which contains a table of the festivals, commemorations and fasting periods for the whole year. It was prescribed by the Syrians in the first few centuries. As a matter of fact, the second oldest copy of this calendar in Christendom is in Syriac and was written in 411.[1] It contained the names as well as festivals of the saints in general and included a group of the Persian martyrs. It exactly corresponds with the table of Anba Jerome.

At the end of the sixth century the monks of the famous Monastery of Qenneshrin had established a special calendar which contained the names of the saints who flourished in this monastery including some of its abbots. They had also days of festivals fixed for their commemoration. At the end of the seventh century, Jacob of Edessa drew up a general calendar for the whole year which included former feasts, fasting and commemorations except the locally observed commemorations. This calendar was used for a long time, but new names of church dignitaries and ascetics were added to it by Said Bar Sabuni, bishop of Melitene (d. 1095).[2] It was revised in the first quarter of the fourteenth century by the monk-priest Saliba Bar Khayrun of Hah (d. c. 1340) who also added to it the names of many bishops and pious ascetics of Tur ‘Abdin, particularly the monks of the monastery of Qartmin.

In Mosul we found a Beth Gazo of two leaves of an old but short calendar relating to the Eastern Church, transcribed in 1546 by the priest Denha of Beth Khudayda, which mentions a few Eastern bishops and ascetics, not present in other calendars. We copied these two leaves.[3]

We also have in our library at Homs two copies transcribed from the old and lengthy original Edessan calendar of Bar Khayrun, one of which is in Amid and the other one in the library in Jerusalem. One of these copies, the lengthy one was published by Assemani in his Bibliotheca Orientals while Peeters the Polish translated into Latin the mentioned calendar of Saliba Bar Khayrun and published it in 1908 with insignificant commentaries.

We close this chapter with a word about the calendar of the movable feasts and days of fasting which was drawn up by Eusebius of Caesarea and later explained, arranged or abridged by Dioscorus Gabriel of Bartelli, bishop of the island of Qardu, in 1296, then, by Chorepiscopus John of Homs around 1716 and finally by Chorepiscopus Jacob of Qutrubul in 1766. This last version of the calendar by Jacob of Qutrubul covers a 532-year cycle (in Syriac, tqlb, a mnemonic representing the number 532 in the Syriac alphabet) was published by the subdeacon Gabriel Bovaji of Amid in College Point, New York in the United States.[4] It begins with the year 1914 and is projected to the year 2221. It serves as a key to the occurrence of the fasting of Nineveh, the Lent, the festivals of the Passover, the Ascension, the Epiphany and the Holy Cross as well as to the beginning of each month in weekdays.

[1] From a phanqitho in the Church of St. Moses in Damascus, transcribed in 1537.

[3] The church in Amid and the library of St. Mark’s Monastery in Jerusalem came under the jurisdiction of the writer who was, at the time of the writing of this book, the Patriarch. (tr.) 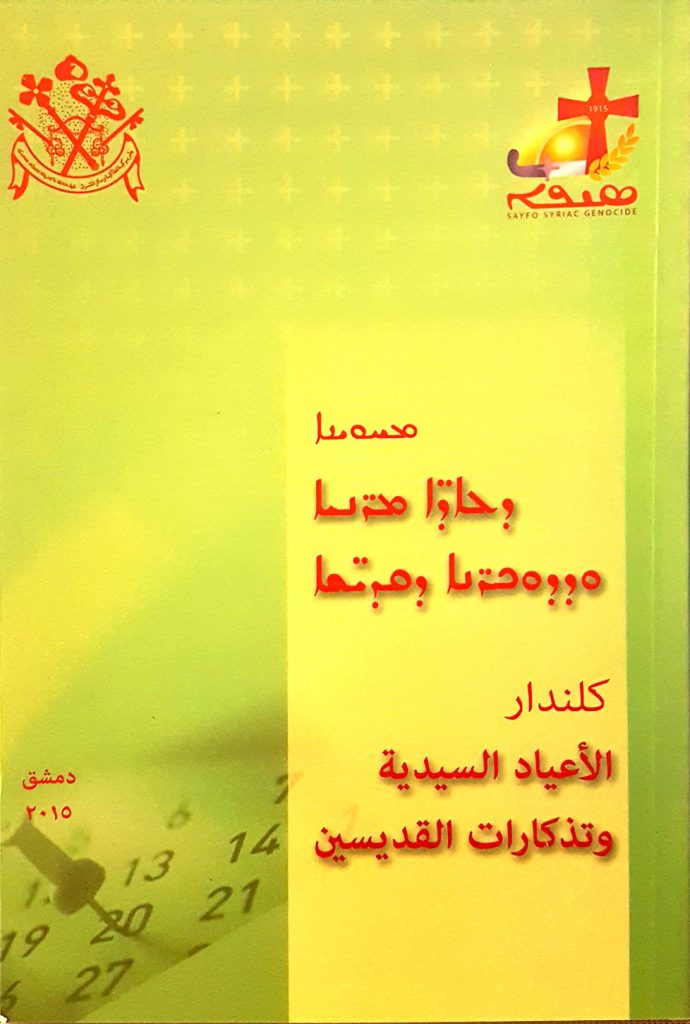 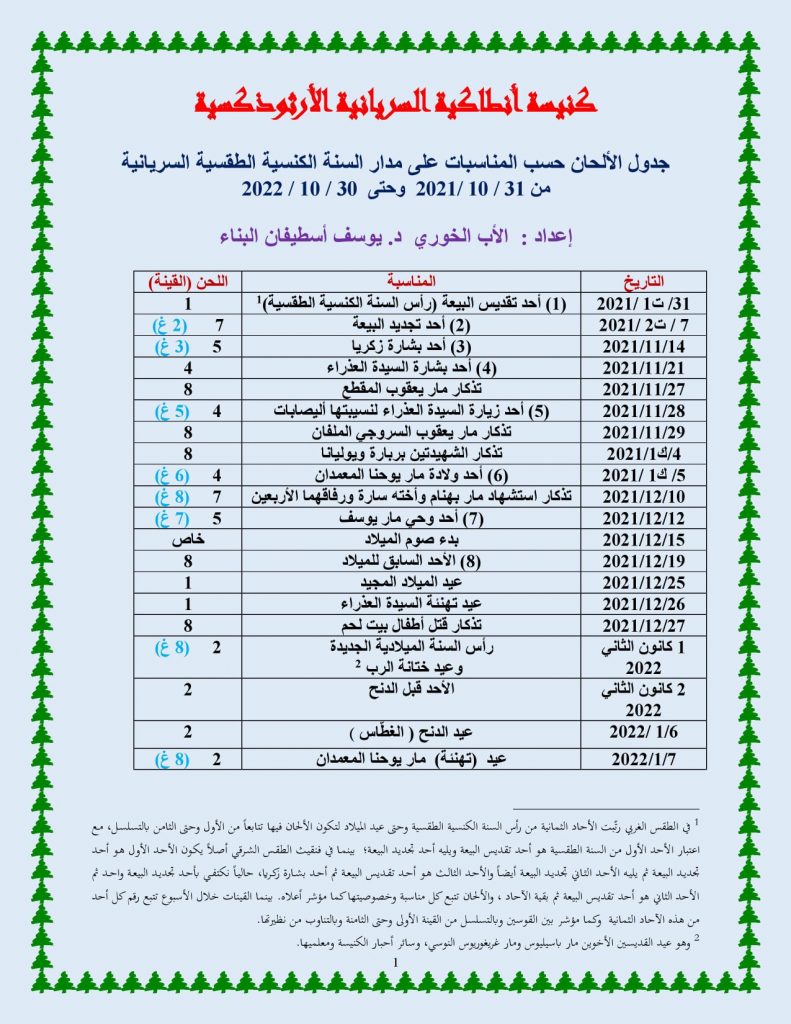 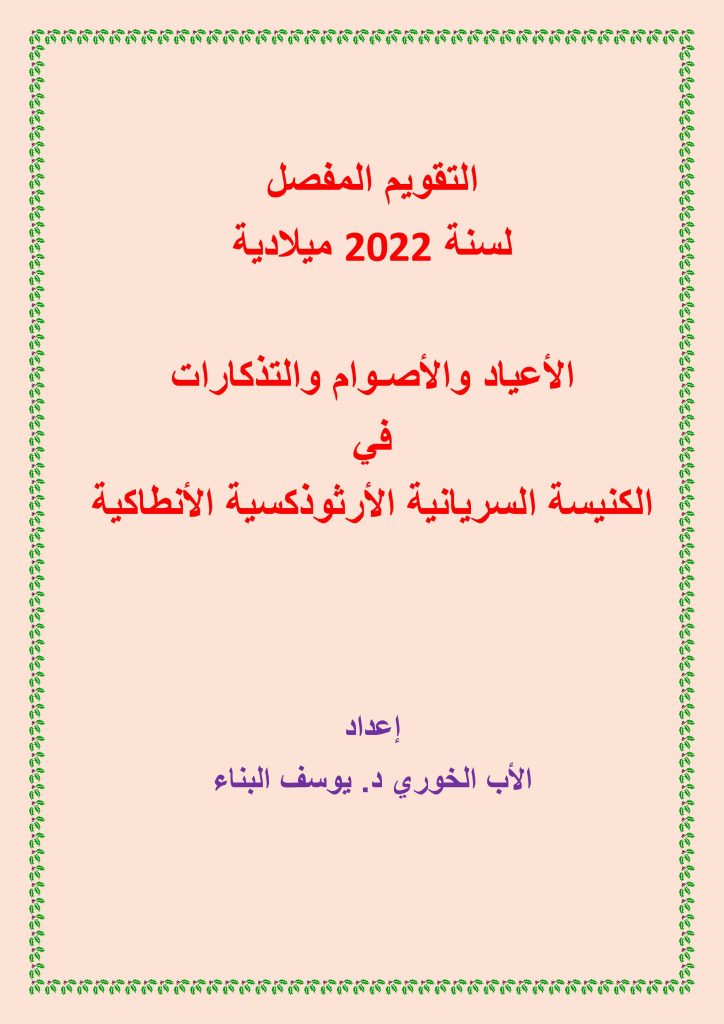