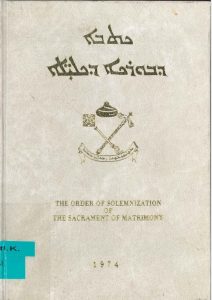 The order of solemnization of the sacrament of matrimony, 1974

The Order of Matrimony

The order for the benediction of marriage and the ceremony of coronation, which had been compiled, arranged and revised by St. Jacob of Edessa and other doctors of the church, 1 contains two services; the first is the betrothal prayer, or the benediction of the wedding ring; the second is the benediction of marriage. This order is followed by another special order for the marriage of a widowed spouse. At the close of the fourteenth century, the priest Isaiah of Basibrina made this order separate from that for persons previously unmarried; the commentary which he wrote on it has since been incorporated into the introduction to this rite. A rather long order of marriage, different from our Western order, is used in Mosul and its neighboring churches.