Adopted at the Armenian Catholicosate of Cilicia in Antelias, Lebanon, January 23-28 2001

Signatures of co-chairmen on behalf of the representatives of the two church families:

His Grace Metropolitan Bishoy, general secretary of the Holy Synod of the Coptic Orthodox Church

Convergences and divergences on tradition and holy scripture, theology, church and mission, priesthood/ministry and sacraments

Concepts of history and revelation, with special attention to the 18th and 19th centuries historical-critical Bible study in the Reformed understanding

The question of canonical books in our respective traditions Understanding of the holy scripture: its authority and its inspiration

The role of the theologian in the Christian community

A Christian theologian is one who is rooted in the faith community and nurtured by it.

Theologians are called upon to express the beauty and splendour of the divine presence in their theological work. Story and poetry, music and iconography, art and architecture, rites and rituals have been used in various Christian traditions precisely to bring out this aesthetic dimension of theology.

Our ultimate goal to reach a common theological understanding which is rooted in our Lord Jesus Christ, is based on the holy scriptures, and is related to the needs and sufferings of humanity at large.

The nature of the church and her mission

the Holy Spirit, worships the triune God on behalf of all God’s creation. This is mission in its totality. The good news (gospel) of Jesus Christ crucified and risen is the heart of the worshipping community. The church announces the gospel of life in diverse ways, always respecting the norm of God’s love and compassion for the world. Proclamation of the Word of God is directed to bring about and foster the signs of the rule of God in human history. The good  news of the redeeming sacrifice of Jesus Christ is proclaimed with the aim of bringing salvation to those who believe in him and are baptized in the name of the Holy Trinity. The church’s prayer and pastoral care, struggle for justice and search for communion are all  vital expressions of her participation in the mission of Jesus Christ, her Lord and Saviour. This redeeming mission calls upon members of the body of Christ to refrain from all forms of aggression and cultural domination in the name of Christ, and instead, to encourage healing and forgiveness, justice and human dignity, peace and  mutual respect among all the peoples on earth. Our freedom in Christ as children of God enjoins us to be compassionately open to all human initiatives for realizing God’s will for the created world. The ultimate form of the church’s mission is to carry the whole creation in all its brokenness and misery before the transforming presence of  the triune God in a perpetual act of praise and thanksgiving.

The nature and the mission of the church: an Oriental Orthodox view (Dr Kondothra M George)

The nature and the mission of the church: a Reformed view (Dr Samuel Habib)

A survey of the recent bilateral agreements between the Oriental

The bilateral agreements between the Oriental Orthodox and the Eastern Orthodox: a Reformed response (Dr Silke-Petra Bergjan)

The use and abuse of the Scriptures in relation to mission, evangelism and proselytism from a Reformed perspective (Dr Peter McEnhill)

Theology and Theologian: their Function and Authority in the Orthodox Church (Dr Kondothra M. George)

The Beauty and Service of Theology (Dr Milan Opocensky)

Holy Scripture, its authority and its inspiration (Dr Karel Blei)

The Understanding of Ministry in the Reformed Tradition (Dr Peter McEnhill)

Introduction to the Sacraments of the Church (Metropolitan Bishoy)

The Reformed Understanding of the Sacraments (Dr George Sabra)

Dr Samuel Habib, Synod of the Nile of the Evangelical Church, Egypt [1993] 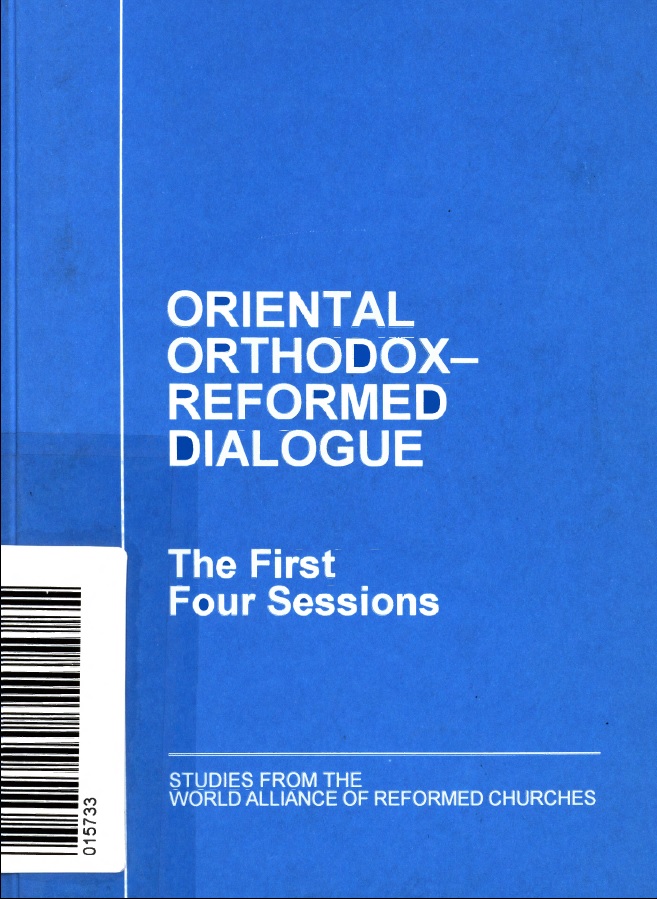